FAQs on Bike the Trail Library to Library

Why is it called Bike the Trail Library to Library?

Library roles in the 21st century are changing as libraries continue to adapt to technology and community needs.  Libraries are an engaging community center.  Books and materials are still a core component to any library but libraries are circulating many more things than just books and, as integral anchors in the community, are involved in many programs in and outside the library building.

Small, rural libraries are always looking for ways to serve our community, attract residents and visitors, and promote multigenerational activities and we’ve identified an asset to our area that has been underutilized but has great potential—the Rock Island Trail.  We feel that Bike the Trail Library to Library fulfills our mission and many of the needs of Trail users.

There are four rural libraries on the Trail system—Toulon Public Library, Wyoming Public Library, Lillie M. Evans Library and Dunlap Public Library. All are library districts and are easily accessible to the Trail.  In addition, the Peoria Heights Public Library has been added as a partner. Previously, there were no bike repairs stations along this stretch of the trail.  The Bike the Trail Library to Library program has provided five.

There are several advantages of cooperation among the trail libraries. All of the libraries have similar accommodations (free wifi, drinking fountains and public areas).  Each of the trail libraries is open an average of 50/hours/week. Cooperation among the libraries also provides funding opportunities. We are very fortunate to have located sponsors for the bike repair stations and volunteers to install them.  Additional grant opportunities are available if we wish to expand the program.

We are confident that Bike the Trail Library to Library is a much needed addition to our services by attracting new Trail users and increasing tourism and growth in our area. Libraries have historically had difficulty in recruiting certain populations to utilize our services.  We usually do well with school age children, families and millennials but often “those who have never been to a public library are more likely to be males and ages 65 and older” (Pew Research Center Libraries 2016, p15).  Bicycling is predominately a male activity in the United States as indicated in the US Department of Transportation’s 2009 National Household Travel Survey. “In the U.S., 24% of all bicycle trips are made by women and 76% are made by men.” This program could help us recruit this population and make them more aware of our services.

Cooperation among the Trail libraries decreases costs.  By sharing our expertise, the Trail libraries will have a template for programming bike repair clinics and Trail ride events.  This eliminates duplications of efforts and saves on costs.  In addition, we can share knowledge and publicity so that we are not duplicating our efforts and yet reach a wider audience.

Where is the Rock Island Trail?

The combination of the Rock Island Greenway and the Rock Island Trail State Park extends from Peoria, Illinois to the town of Toulon, Illinois for 39 miles of rail-trail. These two connected rail-trails are along the right-of-way of the former Rock Island & Peoria Railroad (RI&P). The railroad originally ran northwest from Peoria connecting with the City of Rock Island on the Mississippi River.

The Trail is relatively recent—officially dedicated in 1989—and built over the Rock Island passenger line that was active from 1871 until it ceased operation in the 1950s.  The Rock Island Trail State Park is maintained by the Illinois Department of Conservation and stretches for 26 miles from Alta, Illinois in Peoria County, to Toulon, Illinois in Stark County. From Alta, the south portion of the Trail (the Rock Island Greenway) snakes through Peoria and is maintained by the Peoria Park District. 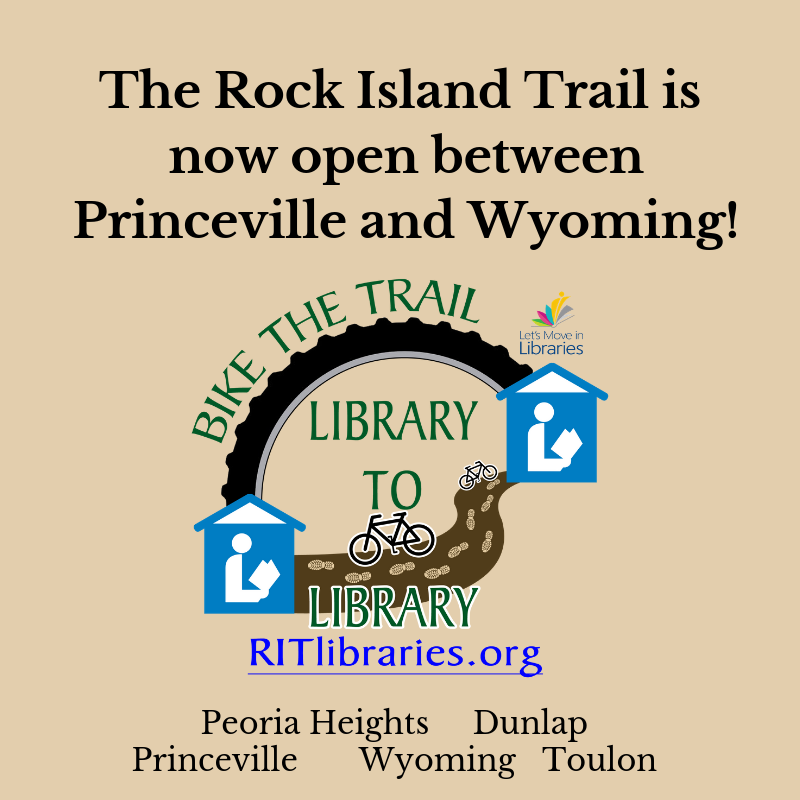